How A Spreadsheet Can Save Your Manuscript (Feature Post)

A spreadsheet just rescued my manuscript, and it can save yours, too – if you’ll let it.

Many writers dismiss Microsoft Excel and the like as tools of accountants and other such number-crunchers. However, the enigmatic grids can help writers focus their work and craft intricate, engrossing plots that keep readers turning the page.

I learned this the hard way. See, in writing, there are plotters and then there are folks like me. We start with a basic story and theme in mind, and then we just let the writing take us where it will.

That’s fine for a while. However, before long, we have fragments of scenes and characters and moments, and none of it goes together well or forms a coherent story. It’s frustrating, even disheartening. I found myself at that point with my manuscript recently. I had written tens of thousands of words but didn’t have a sense for what exactly what I had done and how – or even if – it all fit together.

I felt my only choice was to step back and take stock. That’s when I turned to Excel. Here’s a quick look at what I did:

I read – or at least skimmed – everything I had written and then briefly described each piece. I noted the characters, the action and the significance of each piece. Most pieces could be summed up in a sentence or two, though a handful required more. 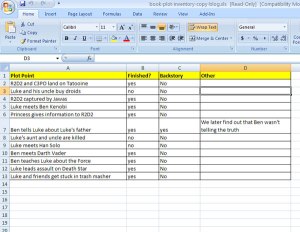 Each piece got its own cell in the spreadsheet. (The first piece I did was in Row 1, Column 1; the second was in Row 2, Column 1 and so on.) I added a second column to indicate if the piece was complete, a third to show whether the scene was back story and a fourth for other notes. You can add other categories to fit your needs.

As I did the inventory, I simply recorded. I made no judgments about value and no effort to put anything in order. That would be done later.

In all, there were more than 100 pieces – some just a few paragraphs long, some spanning several pages – to piece together.

Step No. 2: Putting the pieces in order

Once my inventory was complete, I pieced the jigsaw puzzle together. I put the pieces I had written in the order in which they would likely appear in my manuscript. I did it by cutting and pasting rows from one part of the spreadsheet to another.

Many of the scenes fell together in an obvious sequence. However, many others had no clear-cut place in a timeline, for various reasons. These random pieces were grouped at the bottom of the spreadsheet.

Ordering the pieces took several days. But when I was finished, I was energized to take the next step.

Step No. 3: Filling in the plot holes

What was missing? How should it start? How would the character get from Scene A to Scene B to Scene C and so on? Is there enough conflict? Are there enough “Wow!” moments? Do all the scenes have a point? Is there the right amount of back story? Should the story be told chronologically? How much time should the story span? Do we spend too much time on one event and too little on others? Do the characters’ actions and decisions make sense? Are there too many or too few characters? Do any pieces need to be revamped to better fit the plot? How do we build tension throughout the story? And just how will it end?

All these questions – and countless more — raced through my head as I worked. I typed, cut and pasted, deleted, rearranged, color coded and labeled. But most of all, I thought. I thought of what would make my manuscript the most compelling, most readable story possible. As I decided on new scenes and new elements, I placed them where they made the most sense in the spreadsheet.

After more than a week of tinkering, my spreadsheet was complete, and my plot was solid. I knew it 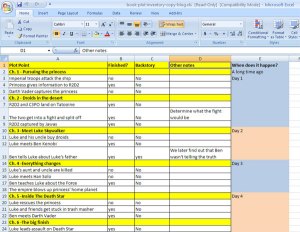 would evolve as I wrote — no plot is ever set in stone until it’s published – but I was ready to get back to writing.

My zeal for this project surprised me. I’m not a plotter, as I said, and truth be told, the process was not always fun. But as I saw my story come together on the spreadsheet, I felt energized and knew my efforts had paid off.

It can work for you, too – if you’re willing to try.