The 27th annual Texas Book Festival Weekend will take place on November 5–6 in and around the State Capitol in downtown Austin. The Festival Weekend is FREE and open to the public, featuring nearly 300 authors of the year’s best books across all ages and genres.

The Writers’ League of Texas is excited to be taking part in all of the festivities throughout the weekend. Read on to see what all we’re doing, and where you can stop by to take in the fun! 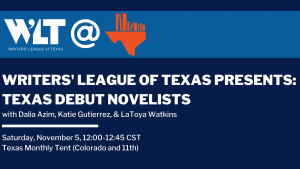 Join the Writers’ League of Texas and three talented Texas authors (Dalia Azim, Katie Gutierrez, and LaToya Watkins) as they discuss their first, and not-to-be-missed, novels. 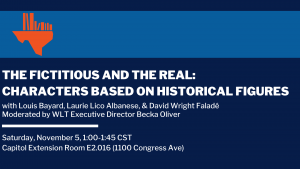 WLT Executive Director Becka Oliver is moderating The Fictitious and the Real: Characters Based on Historical Figures on Saturday from 1:00 PM – 1:45 PM CST at Capitol Extension Room E2.016 (1100 Congress Avenue).

Three authors discuss their fictional accounts of historical figures. Laurie Lico Albanese’s Hester reimagines the life of Hester Prynne—a Hawthorne character inspired by a real individual—as a newly arrived woman in Salem who develops a relationship with a man whose ancestors killed women with unusual gifts. In Jackie & Me, bestselling author Louis Bayard tells the story of Jackie Kennedy’s marriage from the perspective of a close family friend. The characters in Zora Neale Hurston/Richard Wright Award recipient David Wright Faladé’s Black Cloud Rising include real-life Civil War sergeant Richard Etheridge and members of the African Brigade, Black Union soldiers who were enslaved only before enlistment. 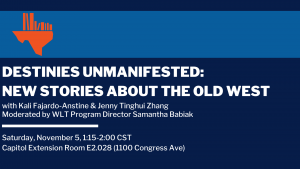 Set in the American West—one novel in the 1880s amid the Chinese Exclusion Act and the other in a 1930s Denver haunted by visions of an Indigenous homeland threatened and devastated—Four Treasures of the Sky by Jenny Tinghui Zhang and Woman of Light by Kali Fajardo-Anstine tell “Wild West” stories not told enough. 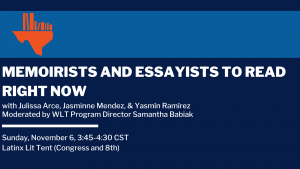 Visit us at our exhibitor booth! Located in Tent 4, we’ll be at booths 406 and 407. Along with interacting with festival-goers, we have a space set aside for our members who are recently published to sign their books. You can find the schedule for our signers below. Swing by through out the weekend to meet these great authors, or just to say hi! 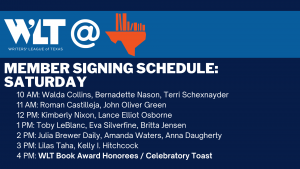 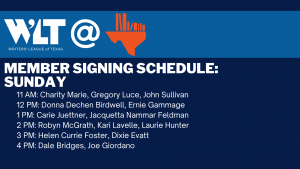 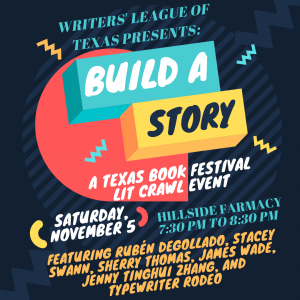 WLT is also participating in Lit Crawl! If you haven’t had your fill of literary goodness from a full day of amazing panels, you can join us Saturday night at Hillside Farmacy (1209 E 11th St) at 7:30 PM CST for a rollicking literary game of fast-paced live story building. We hope to see you there!